How to enhance your idea with customer feedback

“Homer, I want you to design the average car for the average American”
If you are a fan of the Simpsons, you should know this episode.

This is a clear example of a full-blown fail.
In the ideal of companies this is a wonderful co-creation, where the client participates in the generation and co-creation of the value proposition indicating what he would like, what he needs, specifying his motivations, etc.

Clients have to write the Three Kings letter, be careful with this feedback.

Well, as shown at the end, many co-creations that start off on the right foot in the end are useless, they can even ruin your idea.
The most important lesson to take is that, in these dynamics, “the user should help you with your idea, not create it for yourself.”

¿Why do co-creations fail?
This cartoon is not so far from what really happens in companies, basically for three reasons:

The co-creation sessions are not an elevator Speech of your idea, you are not selling your concept, you are asking if it adds value.

¿How do we structure a co-creation session to get the most out of it?

In the co-creations you are raising the cards. This is when you show what you have to your user and you must have a pure mind ‘like a Zen master’ so that your ego does not appear when your user does not understand what you have shown him and wants to build on top of it.

In a way, these dynamics are the closest thing to psychology sessions, but using your concepts as an element of expression. Why. through your idea or prototype, they begin to tell you what is wrong with their life.

If your idea gives them something, they will start building with you.

And that is the most magical moment that a company can have. You are doing something good for your client. This is when the prototype gets its value: how to show an idea that does not exist? How to show something intangible? Can you talk to the user about something abstract? Or should you show him something tangible?

Never go to a co-creation session without concepts, the client will not think for you.

To explain how to structure a session, we are going to talk about 4 key moments that you must take into account, if you do, you have a good chance of getting the most out of the session:

Conclusions
The next time you want to do a co-creation follow these three rules:

At Thinkersco, co-creation sessions are a key part of the project as they complement any research very well. In these sessions you get the main needs of your client, because thanks to the prototype or your seed concept the user is able to express himself better.

Would you like to know real examples? We invite you to see our real projects here.

Design Thinking to improve adherence in patients When you are...

Design Thinking para mejorar la usabilidad Have you ever entered... 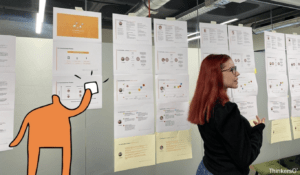 Knowing the needs and motivations of your users is essential...